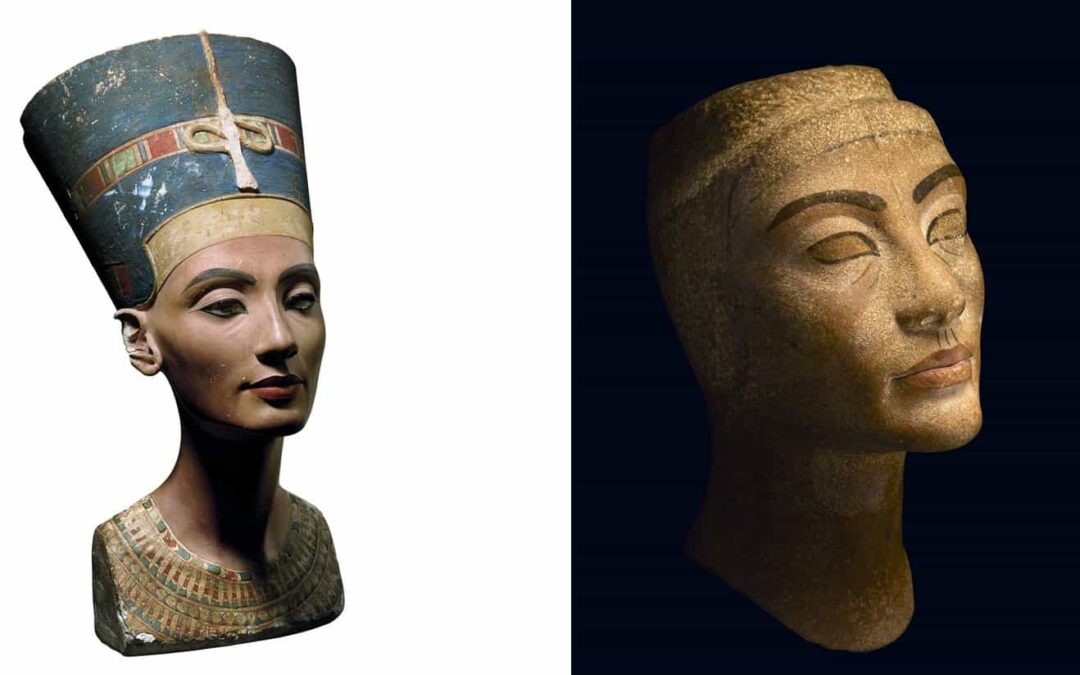 In year five of his reign, Pharaoh Amenhotep IV and his beautiful wife Nefertiti, the Great Royal Wife, undertook a long journey from the country’s capital, Thebes, in Upper Egypt.

Onboard the royal barges, the monarch and his court traveled 225 kilometers down The River Nile until they reached Tell El-Amarna, also known as Amarna.

The Pharaoh interpreted his vision as a divine message: “It was my father, Aten, who advised me of this place so that I could make for him the Horizon of the Sun.”

Indeed, this must have been the site of a new city, founded by the King in honor of his new god, Aten, the solar disk, and gave it the name of Akhetaten, the Horizon of Aten.

The royal entourage disembarked shortly after, where the so-called Little Temple would rise. Amenhotep recorded the exaltation in the texts of the first monuments (stela) that surrounded the chosen space.

The narrative builds to a climax of admiration for the god Aten and enthusiasm for the new capital, as the King indicates where the official buildings should be located.

The Pharaoh made a special effort to highlight the role of his wife in the founding of Amarna. In another text, he indirectly acknowledges that Nefertiti was his adviser and contributed to his decisions.

More curious is another proclamation from the King: “I have made the “Horizon of the Sun” as a farm for my father, Aten, and so that it will endure as belonging to my name or to the name of the Great Royal Wife, Neferneferuaten Nefertiti.”

Akhenaten thus equates the perenniality of his own memory as the builder of the Horizon of the Sun with that of the Queen.

Amarna began its journey as the new capital of Egypt.

From the beginning of his reign, Amenhotep IV had proposed to impose as the main god of the country, the one traditionally considered the universal creator, the Sun, under his patronage of Aten.

In Thebes, the traditional capital of the kingdom, the powerful clergy of Amun and the arrogant nobility of the time had shown a frontal rejection of this reform. This meant the end of the statues and representations in human form of the different divinities, leaving only Aten.

To circumvent this opposition, the still Amenhotep decided to move the court to an uninhabited desert. The Pharaoh also decided to change his own name, adopting Akhenaten, the “living spirit of Aten.”

From then on, the sovereigns, especially the Queen, became the great protagonists of life in Amarna.

Palace audiences, public processions, and religious celebrations punctuated the capital’s calendar, as represented in the decoration of numerous tombs of Egyptian nobles that are preserved in the mountains surrounding the city.

The Calzada Real, a great processional route that crossed the city from north to south, flanked by temples and official buildings, had particular importance in these public acts.

The passage of the royal chariots along this avenue would amaze the people with unprecedented scenes; sometimes the kings kissed in public, while on other occasions, it was Nefertiti who was driving her own chariot – something never seen in other queens.

The Lady of Amarna

Nefertiti was covered with titles that reflect the exceptional relief of her figure.

For example, in the hieroglyphics of a column in the Great Palace, the title of ‘Lady of the Two Lands’ is given to her without being preceded by that of the Great Royal Wife. This makes her the only Egyptian queen to declare herself Lady of Egypt without support from her husband.

On the other hand, in relief from the cabin of the Queen’s ship, she adopts the pharaonic posture of crushing the head of a prisoner with a ritual mace, another typical scene of the Egyptian pharaohs’ representations.

Other images of Amarna allow us to glimpse the intense family life of Akhenaten and Nefertiti, who openly showed their love for their daughters.

The stelae preserved in Cairo and Berlin showing these tender scenes are a breath of fresh air in the rigid pharaonic iconography.

The same goes for the painting found by Flinders Petrie in the private rooms of the Amarna King’s House, considered to be the Pharaoh’s office. The delicacy and serenity of the scene highlight the affection of a family that enjoys its privacy.

From glory to oblivion

Despite the significant role of the Queen in the history of Amarna, she herself must have been aware of the difficulty of establishing the new religious principles in the minds of her subjects in such a short time.

It is perhaps significant that in the case of the two little daughters of Nefertiti –Neferure and Setepenre– the name of Aten was replaced by that of Ra.

Would the Queen realize the disastrous reception of the changes initiated?

To make matters worse, the international political situation markedly worsened for Egypt; the vassal princes were fighting each other, and the Hittite King, Suppiluliuma I, seized the Egyptian colonies in Syria.

A great tribute festival was held in the twelfth year of Akhenaten’s reign, presumably to commemorate a victory over Nubia. We know the details because it was depicted, with the solemnity and vividness of Amarna art, in the decoration of the tombs of two noblemen: Huya and Meryre II.

Shortly afterward, King Akhenaten’s second daughter, Meketaten, died. She was buried in a room in the royal tomb of Amarna, where the grief of her parents and sisters is shown. It is also one of the last appearances of the Queen in the texts of the time.

From year fourteen, the trail of Nefertiti is lost. She may have died in the early years of Tutankhaten’s reign when he had already changed his name to Tutankhamun and had abandoned Amarna as well as the Athenian religion that Nefertiti and her husband had tried to make triumph.