Home / The Golden Throne of Tutankhamun

The Golden Throne of Tutankhamun 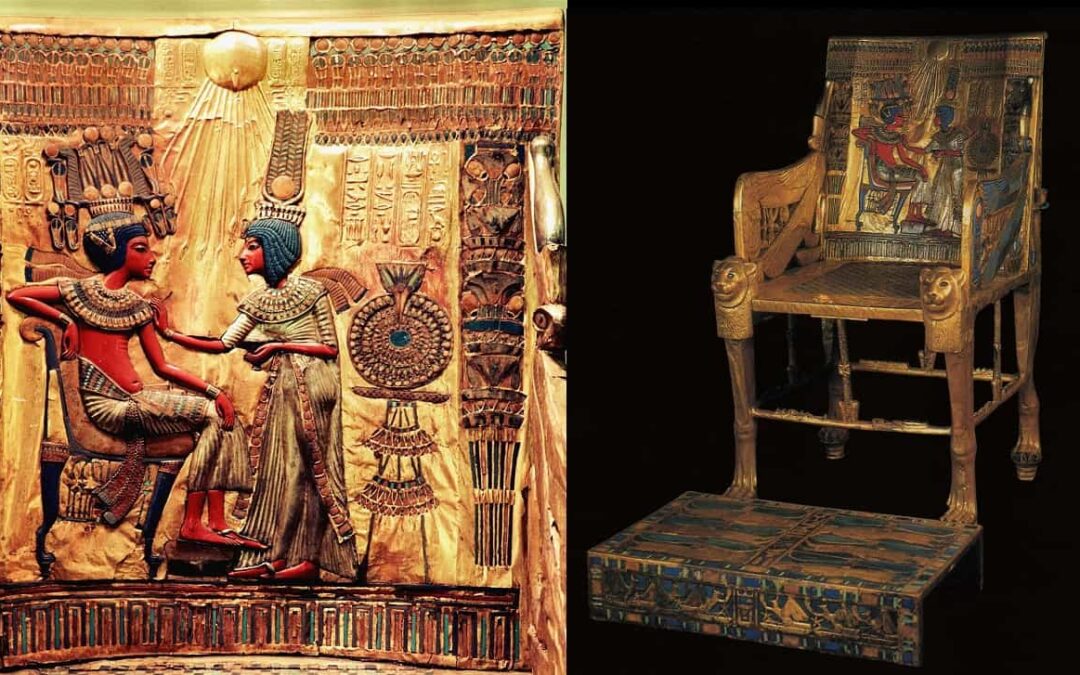 The pharaoh Tutankhamun, whose reign lasted between 1332 and 1323 BC, remains one of the most enigmatic and attractive figures of the Egyptian New Kingdom.

The young King had succeeded his father, Akhenaten, who had moved the spiritual capital of the country to Tell el Amarna and had abandoned the cult of the traditional Egyptian gods in order to establish monotheism around a single god named Aten.

Tutankhamun, however, soon turned away from his father’s revolutionary ideas. He restored the worship of the many gods of the ancient Egyptian pantheon and ancient privileges to the great temples of Amun in the city of Thebes.

It is not clear if this was a personal decision or if it was pressured by the nobility, the army, and the priests of the temples, the true groups of power in that society.

The fact is that Tutankhamun died shortly after, barely twenty years old, and the religious restoration would be continued and definitively consolidated by his successors, Ay and Horemheb, and by the pharaohs of the nineteenth dynasty.

Among the most interesting objects in the first chamber of Tutankhamun’s tomb is the golden throne of the pharaoh.

A throne is particularly symbolic because it is where the personification of power sits. The king is seated while his subjects remain standing, a type of behavior that clearly expresses the established social hierarchy.

From his throne, the king grants an audience, imparts justice, makes political decisions, and exercises his power effectively. Furthermore, according to the ancient Egyptian worldview, the pharaoh was considered a living god on earth.

The throne thus symbolizes majesty, stability, security, and balance and is a kind of synthesis between Heaven and Earth, between the world of gods and that of men.

Tutankhamun’s throne contains an entire allegorical universe within itself. It is made of wood decorated with gold leaf, silver, glass paste, and semi-precious stones, such as lapis lazuli, carnelian, and turquoise.

It measures 100 cm high x 54 cm wide x 60 cm long. The piece shows great technical perfection, and its artistic quality makes it one of the dominant masterpieces of the Egyptian Museum in Cairo.

If we observe it in detail, we can appreciate that the legs are shaped like lion claws, and the front dons the heads of this animal.

The arms show symbols of the unification of Upper and Lower Egypt, such as the double crown and the heads of a cobra and a vulture.

The wings of the vulture surround the sign of infinity. The symbol on the right arm shows the original name of the pharaoh, Tutankhaten, while the one on the left shows the renewed name of Tutankhamun.

This change alludes to the religious restoration produced during his reign after the so-called Amarna period. The throne is accompanied by a footstool carved in wood and covered in stucco and gold leaf.

It depicts the enemies of ancient Egypt; they are symbolically trampled on by the pharaoh while seated. A hieroglyphic text clarifies this iconography, “All the great foreign lands are under your sandals.”

The back of the throne shows one of the most beautiful and sentimental scenes in the entire history of ancient Egyptian art. It is the direct heir to the characteristic representations of the Amarna period, used to show the royal family in intimacy, in an affectionate attitude.

A clear antecedent of this scene is the stele of Akhenaten and Nefertiti playing with their daughters, which is also found in the Cairo Museum.

The young pharaoh appears seated on his throne, entertained by his wife (and his sister) Ankhesenamun. Ankhesenamun is crowned by a sun disk surrounded by two large feathers. She wears a large breastplate and wears an informal robe.

She is applying scented ointment to her husband’s shoulders. He wears a large composite crown and appears dressed in bracelets, a pectoral, and a long skirt.

The Enigmatic Guardians of the Tomb of Tutankhamun