Home / How heavy is your heart?

How heavy is your heart? 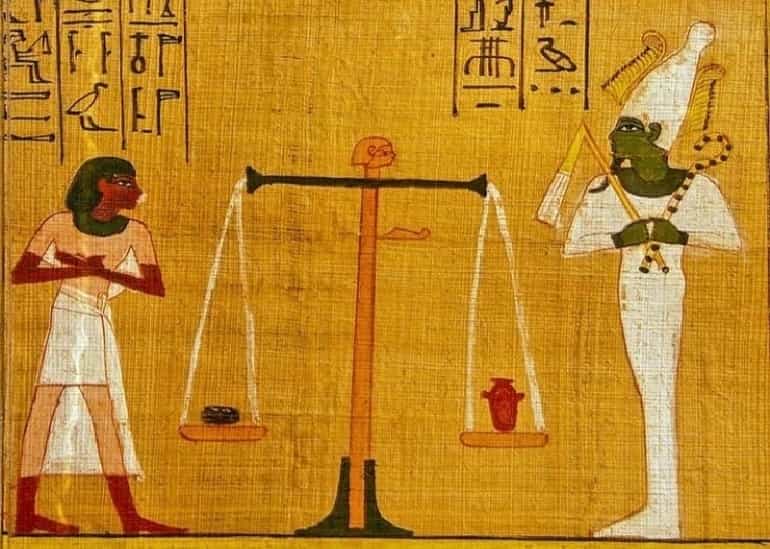 Ancient Egyptians venerated their dead and insistently sought to preserve the memory and essence of people in their graves, hides a very particular belief, which consists of placing on a scale the most important organ of the body in order to know if a person deserves or not, happiness after death.

One of the fundamental characteristics of ancient Egyptian culture is the preparation of the deceased.

All their traditions and cultures are protected in “The Book of the Dead” which includes all kinds of magic formulas, strategies and rituals that the deceased must use to finally achieve life on the other side.

The Egyptian belief in life after death made funeral rituals intense and well-prepared.

All the relatives of the deceased had to guarantee that he was well prepared to face all kinds of dangers and threats that would stand in the way of his afterlife.

Culture professes that the dead undertake an underground journey from west to east, just as the sun does –or Ra, which cyclically returns to its starting point, during the trip that was on the Ra raft, he had to face a series of dangerous beasts and impossible mazes whose goal is to disorient him.

Osiris’ judgment: How heavy is your heart?

The ancient Egyptians foresaw that many challenges awaited them in the hereafter, but without a doubt the most complicated was to emerge victorious from the final judgment with the court of Osiris.

If the deceased managed to pass all the previous tests, he would reach the most important and the most difficult: the trial of Osiris.

Before entering Horus, who is the son of Isis and Osiris, will accompany the dead man to the courtroom, where he must face 42 judges.

At the time of the trial, the deceased had to convince the members of the court – being absolutely honest – that his moral conduct had been faultless.

In “The Book of the Dead” there are a series of phrases that must be repeated, for example:
“I have not committed iniquity with respect to men; I have not killed any of my relatives; I have not lied instead of telling the truth; I am not aware of any treason; I have done no wrong; I have caused no one suffering; offerings to the gods… ”

After the session with the judges, the most complex part came: weighing the heart.

How did they do it? A giant scale occupied the center of the room, which would be surrounded by 42 members of the court, some ancient Egyptian gods and the deceased who is waiting his trial.

On one side would be a feather of the goddess Maat – who represents justice, order and balance – and on the other the heart of the deceased.

Why weigh the heart? For the ancient Egyptians, the heart gathered all the intelligence, emotions and even the actions – good or bad – of a person, it was the compendium of all its essence.

The final judgment: Will he go to paradise or die in the claws of the beast?

If the heart weighed exactly the same as the feather, the deceased earned entry to the The Field of Reeds (Aaru) – better known as the Egyptian paradise – a place reigned by Osiris where pleasures abounded.

If the heart weighed less or more than a feather, destiny was imminent: a creature with a crocodile head, hippopotamus legs, torso and lion’s mane better known as “the devourer of the dead” would be devoured by Ammit.

This canceled all possibilities of rebirth.

Fun Fact: The phrase “Having a heart like a feather” comes from this Egyptian tradition, in which a person’s heart must weigh exactly the same as a feather.

What current medical practices have their origin in Ancient Egypt?

Egyptian Book of the Dead