Home / The tomb of queen Nefertari 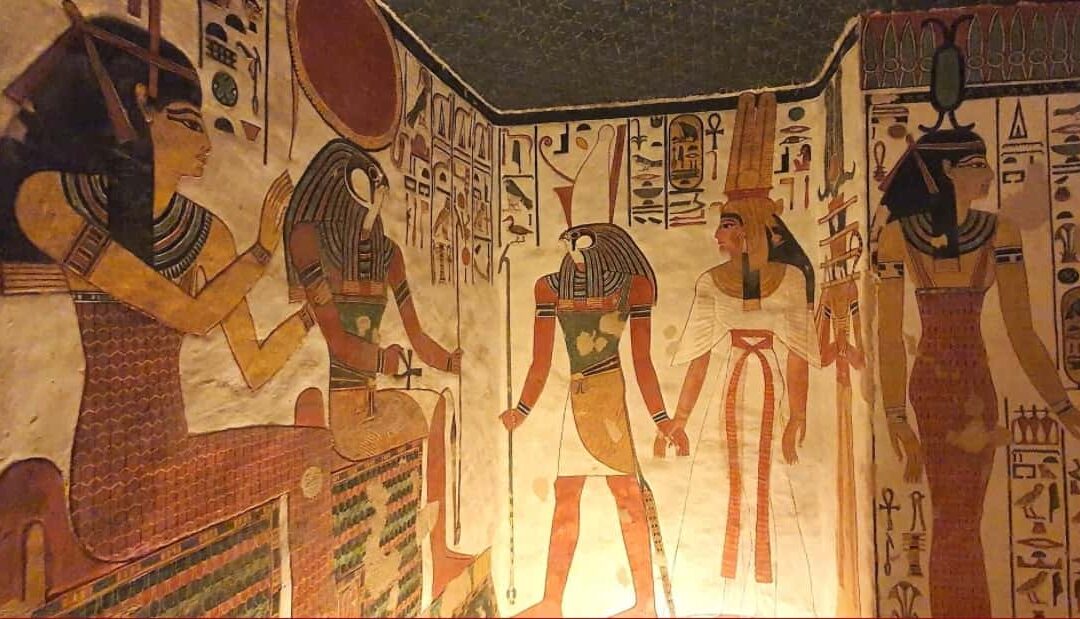 In 1904, archaeologist Ernesto Schiaparelli discovered the splendid tomb of Ramses II’s favorite wife in the Valley of the Queens. Her beautiful paintings showed the different stages of the queen’s journey to the kingdom of Osiris.

In 1255 BC, Queen Nefertari Meritmut, Great Royal Wife of Pharaoh Ramses II, of the 19th dynasty, left this world to go to the Fields of Iaru.

Nefertari was buried in a necropolis tomb known among the Egyptians as Ta-Set-Neferu, ” the place of the most beautiful “, located on the mountain next to the religious capital of Upper Egypt, Thebes, and which we know as the Valley of the Queens.

This cemetery began to be used during the 18th dynasty of the New Kingdom to build burial tombs for upper-class private figures.

But during the 19th dynasty, with the burial of the queen Sitre, wife of Ramses I, the place became the site of the tombs of the queens who held the title of Great Royal Wife as well as the princes.

The choice of this place as a royal necropolis was not fortuitous. It is situated near the top of the Theban mountain and was an area associated with the cow goddess Hathor, since the cave there was assimilated to the uterus of the Celestial Cow.

The tombs, which are hypogea, were dug inside this uterus to facilitate the rebirth of the deceased. The necropolis continued to be active during the 21st dynasty, when characters who were not of royal blood were buried there.

The place was forgotten until it was rediscovered by the first explorers of the 19th century. The first to visit it was Robert Hay in 1826 and only two years later John Gardner Wilkinson made the first classification of the graves.

It was then that Jean-François Champollion gave it the name of the Valley of the Queens. However, in-depth investigations would only begin at the beginning of the 20th century, when the Egyptian Museum in Turin sent an archaeological mission led by Ernesto Schiaparelli to ancient Thebes.

The work carried out by the Italian team obtained very good results. In 1906 Schiaparelli discovered the inviolate tomb of Kha, the supervisor of the Deir el-Medina workers, and his wife Merit.

But undoubtedly the most spectacular discovery was the tomb of Queen Nefertari, the largest and most beautiful in the Valley of the Queens, in 1904.

A grave robber indicated the location to Schiaparelli, who as soon as he entered it he realized that the grave had been looted a few years after the burial.

That is why he ordered the construction of an arched adobe portal to protect the entrance to the tomb, he placed iron doors in the other tombs in the valley and proceeded to number them.

The structure of the tomb of Nefertari

It is the typical one of the tombs of the Nineteenth Dynasty of Egypt. The entrance is made by a staircase of 18 steps, which leads to the first level of the sepulcher, made up of a quadrangular antechamber and an annex.

From the antechamber, a second flight of stairs descends to the burial chamber proper, which has three annexes and in the center of which the queen’s sarcophagus was placed, although Schiaparelli only found some fragments of the lid.

A small niche had been dug in one wall to deposit the canopic box containing Nefertari’s mummified viscera.

Scenes from the Hereafter

What makes Nefertari’s tomb the most beautiful in the Valley of the Queens is its wall decoration. Made by decorating workers in the nearby Valley of the Kings, the paintings in the tomb are brilliantly colored and of exceptional quality.

In general, the lower part of the walls was painted with a black strip on which another strip of yellow and red was placed. The ceilings, on the other hand, represent the dark blue painted night sky covered with golden five-pointed stars, with the sole exception of the ceiling of the entrance door of the first chamber.

The decorative program of the tomb is a representation of various chapters of the Book of the Dead, a collection of funerary texts related to the different stages of the deceased’s journey to the Hereafter, according to ancient Egyptian beliefs.

The scenes can be read both descending, following the path that the coffin made on the day of her burial, and ascending, since it was believed that the queen’s spirit was reborn daily in the sepulchral chamber and went up to join the gods on the eastern horizon, where the sun rose; hence, on the roof of the entrance door Nefertari appears represented as the solar disk, symbolizing Ra’s ascent towards the horizon.

Thus, the paintings on the first level of the tomb show the mummification of Nefertari’s body and how the queen is welcomed by the different divinities.

For example, on the south wall of the antechamber, the queen is represented in three different scenes, corresponding to chapter 17 of the Book of the Dead.

The first one shows us Nefertari sitting in a high-backed chair inside a kind of hut made of reeds. Before her there is a table with a board of the senet game, in which the queen participates, since with her left hand it appears that she is about to move a piece before an imaginary opponent.

The entire scene is completed with hieroglyphs in which the name and titles of the queen appear.

Related to this scene the following representation of Nefertari shown, as the bird – Ba with a human head on a small chapel.

In the funerary context, Senet game symbolizes the possibility that the spirit of Nefertari day trip out of the grave and then overnight at the home of eternity.

The decoration ends with an image of the queen worshiping the representation of the god Aker, symbolizing the horizon, located at one end of the west wall.

This wall is complemented by the image of Nefertari’s mummy on a funerary bed with the head of a lion, flanked by the divine mourners Isis and Nephthys, represented here as two kites.

The journey to the Kingdom of Osiris

Already in the burial chamber, the decoration of the walls shows the guardians of the gates of the kingdom of Osiris and the protectors of the portals of the underworld, images that are accompanied by the ritual invocations that the deceased must make when passing through each of these doors and portals on her journey to the Hereafter, according to chapters 144 and 146 of the Book of the Dead.