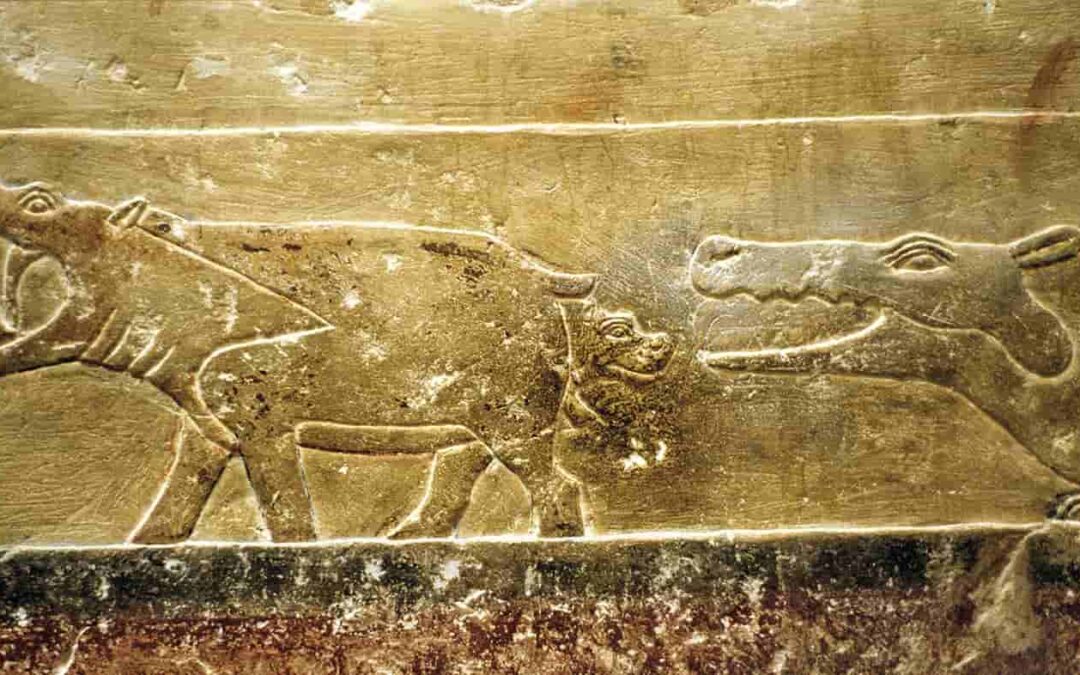 These large reptiles, which represented a threat to those who lived on the banks of the Nile, were objects of both fear and devotion on the part of the ancient Egyptians.

Within the populated fauna of the Nile, the crocodile has always been one of the most characteristic and disturbing presences. Measuring up to twenty feet in length, its powerful jaw and scaled shield represented a constant and agonizing threat to ancient Egyptians, used to sailing and fishing in fragile papyrus boats.

It is not surprising, therefore, that this fearsome animal occupied a prominent place in Pharaonic culture.

For the ancient Egyptians, the crocodile was synonymous with danger. Some signs of hieroglyphic writing show the saurian with one or more knives stuck in its body.

In addition, some terms were written with a crocodile-shaped particle to express concepts related to “aggressiveness” and “greed”.

The stealthy reptile posed a threat to all who approached the shore of the Nile, beginning with the other animals. Thus, in a papyrus of the New Kingdom some spells necessary to protect the horses that crossed the river are recorded.

As for humans, the danger of crocodiles became a literary topic. In the “Satire of the Trades”, for example, the risk run by the washerman who washes on the bank of the Nile having the crocodiles as neighbors, or the fisherman who works in the river mixed with them.

In Dialogue of the Desperate Man with his Ba, the protagonist declares: “Look, my name is hated, more than the stench of crocodiles, more than sitting on a sandbar full of crocodiles.”

In the “Westcar Papyrus”, a fantastic crocodile intervenes in a tale of jealousy and revenge.

In the story, the priest Ubaoner discovers that his wife is unfaithful to him and upon learning of the appointment scheduled by the lovers, he creates a wax crocodile that, through magic, comes to life and traps his wife’s lover, taking him to the bottom of the river. After several incidents, the animal eats the unfortunate, while the wife burns to death.

But the crocodile was not just a terrifying beast. It also evoked special reverence, which caused various deities to take its form.

Thus, the falcon god Horus transformed himself into a crocodile to bring his father Osiris out of the depths of the river, killed by his evil brother Set.

The crocodile was also identified with the solar god Ra at the time of his resurrection emerging from the Nun, the primordial waters.

In any case, the crocodile-god par excellence was Sobek, whose name precisely means “the crocodile”. First depicted in the shape of this animal, Sobek was eventually depicted with a human body and a crocodile head.

In the Middle Kingdom Sobek became solarized, and under the 13th dynasty Sobek was adopted as the patron of royalty.

Sobek was a god of fertility, vegetation, and creative power. He was lord of the waters and wetlands, but at the same time he was a protector god, since the Egyptians observed that he was a fierce defender of his eggs.

In Egyptian iconography there were numerous hybrids of crocodiles and other animals. An aquatic form of Horus had the body of a crocodile and the head of a hawk.

The beneficent goddess Taweret, a deity of the home, protector of women during pregnancy, childbirth and birth, had the head of a hippopotamus, legs of a lion, human breasts and the tail of a crocodile, while Ammit, a monster in charge of devouring souls of the deceased who did not pass the judgment of Osiris, he was half lion, half hippopotamus, and had the head of a crocodile.