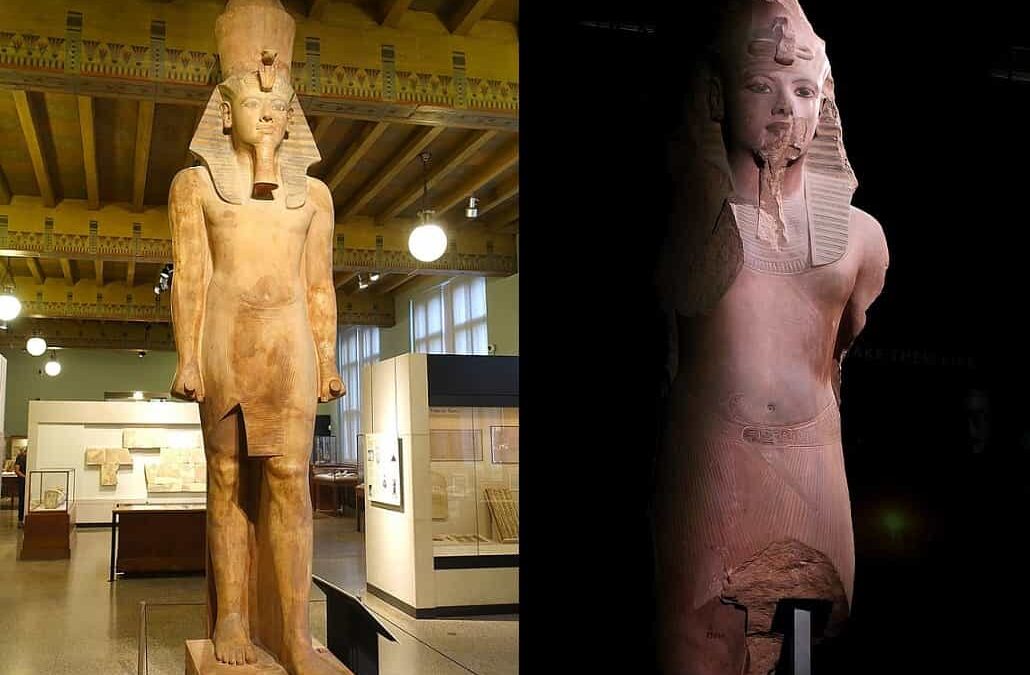 At the Oriental Institute of Chicago, the nearly 75,000 annual visitors have the opportunity to marvel at the sight of the colossal statue of King Tutankhamun.

This fantastic sculptural work from the 18th dynasty shows a colossal statue of Tutankhamun (usurped successively by Ay and Horemheb) in polychrome quartzite. It is 525 cm high.

It all began in 1931, when archaeologists from the University of Chicago’s Oriental Institute found fragments of two identical statues of Tutankhamun in the rubble of a mortuary temple in Luxor.

Egypt kept possession of the best-preserved statue and gave the other to the American Institute. Obviously, this moment in history was very fortunate for the museum that now owns it, and for the archaeologists of the Institute who discovered it, since Egypt shared pieces with the foreign scientists who helped excavate its past.

Since World War II, it has been forbidden for any object connected to its magnificent history to leave its home country.

Uvo Holscher, a German archaeologist working for the Institute, found the two statues of Tutankhamun in his mortuary temple.

The temple was a huge structure located on the edge of arable land, and the construction of which began during the life of the pharaoh, was completed by Ay, and was expanded by his successor, Horemheb. It was then literally erased from the profile of the land following a flood some 150 years later.

After Holscher discovered the temple, Egyptian government agencies selected and kept the best-preserved objects. As was the custom in the 1930s, the Institute was allowed to choose some of the remaining fragments for its museum.

What made it to Chicago were four large fragments of the pharaoh’s head and torso. By taking casts of the statue’s more complete twin left in Egypt, the Institute’s legendary restorer, Donato Bastiani, was able to restore the statue to its full integrity again.

The inscription identifies the sculpture as an image of Tutankhamun. The restoration was carried out using a cast taken from the intact areas of the statue preserved in Cairo.

The colossal statue of Tutankhamun was excavated by the Oriental Institute of Chicago at Medinet Habu in 1930–1; as was the statue in the Cairo Museum.

Twosret, the "powerful lady" who reigned among chaos

The Height of the Pharaohs