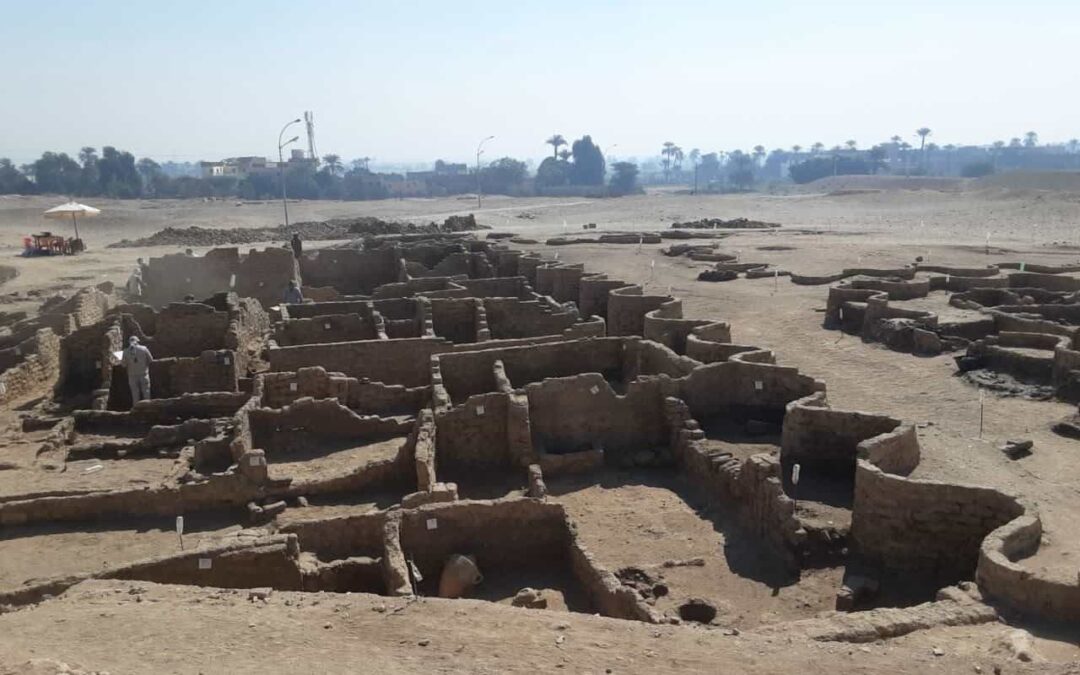 The famous Egyptologist Zahi Hawass has announced the discovery of a great industrial and administrative city, the largest discovered to date in Egypt, on the west bank of Luxor.

An Egyptian archaeological mission led by Egyptologist Zahi Hawass has made a sensational discovery: An ancient lost city in Luxor called the “Rise of the Aten”, which disappeared under the desert sands three thousand years ago.

“Many foreign missions searched for this city and never found it. We started our work looking for Tutankhamun’s mortuary temple because Horemheb and Ay temples were discovered in this area,” said an exultant Hawass.

The Egyptian expedition was surprised to see that they had just discovered the largest city ever found in Egypt, founded by Amenhotep III, father of Akhenaten, the famous pharaoh architect of the religious revolution that implanted the cult of Aten, the solar disk.

A large industrial and administrative city

From what emerges from the findings, the “Rise of the Aten”, located on the west bank of the Nile (where the necropolises and funerary temples of the monarchs are located), was the largest administrative and industrial settlement in Egypt.

“The streets of the city are dotted with houses; some of its walls are up to three meters high. We can reveal that the city extends to the west, as far as the famous Deir el-Medina (the village of the builders of the tombs of the Valley of the Kings),” explains Hawass.

Many researchers have been absolutely fascinated by this discovery. For example, Betsy Brian, professor of Egyptology at John Hopkins University in Baltimore, USA, has stated that “the discovery of this lost city is the second most important archaeological discovery in Egypt since the tomb of Tutankhamun.

The discovery of The “Lost Golden City” will not only provide us with an exceptional insight into the life of the ancient Egyptians in one of the greatest moments of their history, but it will also shed new light on one of the greatest mysteries in history: Why Akhenaten, together with his wife Nefertiti, decide to move to Amarna?” Brian wonders.

In principle, the objective of the Egyptian archaeological mission in this area was to find the funerary temple of Tutankhamun, since his successor, Ay, built his own temple in a place that later adjoined the temple of Ramses III on its south side in Medinet Habu.

Egyptologists believe that the temple of Ay may have previously belonged to Tutankhamun, as two colossal statues of the boy king were found there. The northern part of the temple is still buried under sand.

Hawass’s team has focused excavations precisely on the area sandwiched between the temple of Ramses III at Medinet Habu and the temple of Amenhotep III at Malqata.

Excavation began in September 2020 and within weeks, to the great surprise of the team, mud brick walls began to appear everywhere.

What they ultimately unearthed was a large city in an excellent state of preservation, with almost complete walls and rooms full of everyday items.

The archaeologists’ first goal was to date the settlement by studying the hieroglyphic inscriptions on some clay lids of wine vessels.

Sources say that the city consisted of three royal palaces, as well as a large administrative and industrial center.

A large number of objects, such as rings, scarabs, colored ceramic vessels, and mud bricks with seals from the cartouche of King Amenhotep III, discovered during the excavations, confirmed the dating.

After only seven months of excavation, various areas or neighborhoods have come to light. In the southern part of the site, the mission unearthed a bakery, an area for cooking and preparing food, with ovens and pottery for storage.

Its large size suggests that this kitchen catered for a large number of workers and employees.

The second area, still in the excavation phase, is the administrative and residential district. It is surrounded by a zigzag wall, featuring a single access point leading to interior corridors and residential areas.

The fact that this district has a single entrance suggests security; perhaps the idea was to be able to control the entrances and exits.

For its part, the zigzag walls are a rare architectural element in the architecture of ancient Egypt, which was used mainly towards the end of the 18th dynasty.

The third area that has been excavated is a workshop, consisting of a production area for mud bricks that were used to build temples and annexes (the bricks are marked with seals containing a cartouche bearing the name of King Amenhotep III.)

A large number of foundry molds have also been found for the production of amulets and delicate decorative elements.

The researchers believe that this is further evidence of the great activity that was carried out in the city to produce decorations of all kinds for both temples and tombs.

In all the excavated areas, archaeologists have also found numerous tools used in some type of industrial activity such as spinning and weaving.

Metal slag and glass manufacturing remains have also been unearthed, although the main area where this activity was carried out has not yet been located.

One of the most recent finds is a container containing about ten kilos of what appears to be dried or boiled meat; it bears an inscription: “Year 37, meat dressed for the third festival of Heb Sed from the slaughterhouse of the Kha corral, made by the luwy butcher.”

This valuable information not only provides the names of two people who lived and worked in the city, but also confirms that it was active during the co-regency period of Amenhotep III with his son Akhenaten.

Another interesting find is a clay seal with a still legible inscription: “gm pa Aten”, which can be translated as “the domain of the dazzling Aten”.

It is the name of a temple dedicated to the solar disk that was built by Akhenaten in the Karnak enclosure, in Thebes. A year after the making of this revealing vessel, the capital was abandoned and the court moved to Amarna.

To the north of the settlement, a large necropolis was also discovered, the extent of which has not yet been determined.

There is still much work to be done and Zahi Hawass hopes to discover many intact tombs there, full of treasures…