Home / The orientation of the pyramids of Giza

The orientation of the pyramids of Giza 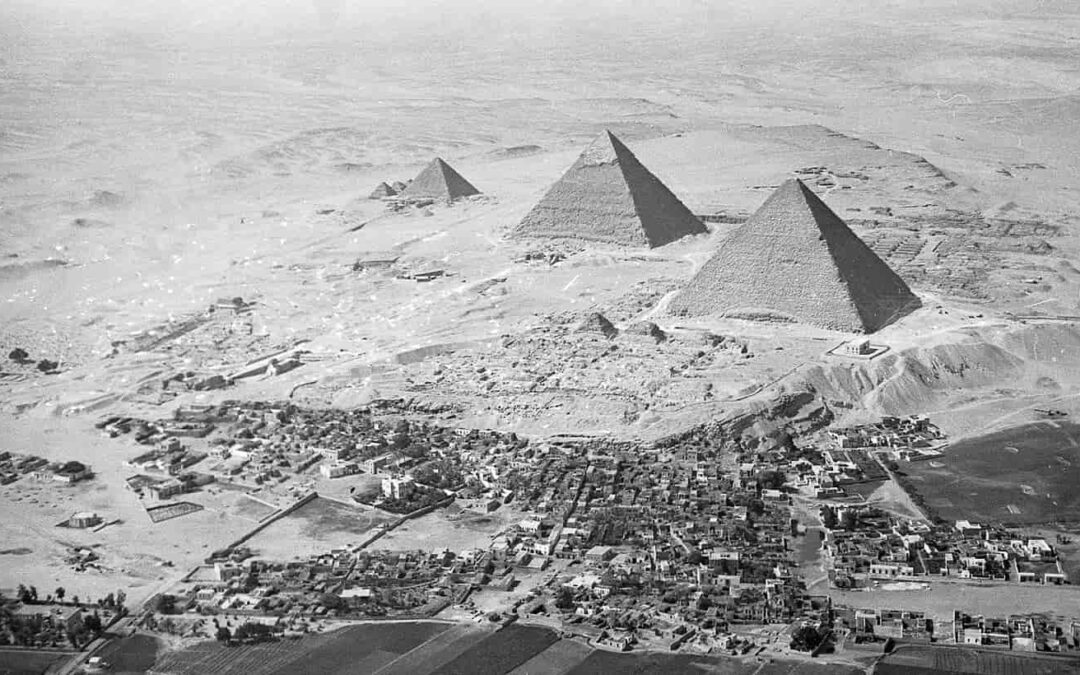 Recent research suggests that, beyond fanciful theories, the pyramids of the Fourth Dynasty, built almost 5,000 years ago, could have a stellar orientation, related to the stay of the deceased pharaoh in the Hereafter.

The ancient Egyptians were great sky watchers. Their system of time measurement produced the sophisticated solar calendar that is at the base of ours; and they also drew a complete star map, as the firmament was closely linked to their religion.

In addition, they aligned their temples in search of the Maat, the cosmic order, and perfected patterns of astronomical orientation that would help them in this purpose.

The intimate relationship between heaven and earth is also manifested in the orientation of the pyramids. It is known that these constructions, in particular those erected on the Giza plateau by the pharaohs Khufu, Khafre and Menkaure around 2550 BC, are oriented towards the four cardinal points.

The question of how they oriented them is one of the most debated in the history of Egyptology.

The Egyptians designated by the name of Meskhetyu the asterism of the Chariot, a set of seven stars in the constellation Ursa Major.

It was represented either by a bull’s leg, or by the hoe that was used in the ceremony of the opening of the mouth, a ritual with which the senses were returned to the mummy of the deceased.

The importance of Meskhetyu is highlighted from very early times, as evidenced by its appearance in the Pyramid Texts, the oldest set of religious texts of mankind; they were so called because they appeared in the burial chambers of numerous pyramids from 2300 BC.

There we read: “I am the one who lives, […] the two Enneads have purified themselves for me in Meskhetyu, the Undying”, words that reflect the deceased king’s desire to travel to the sky and become a stellar entity there together with the so-called “imperishable stars” or immortal: the circumpolar stars, which, unlike the others, are always visible in the night sky.

This idea would go back, at least, to the beginning of the Old Kingdom, as the author of these lines has stated in the stepped pyramid of King Djoser in Saqqara, erected around 2650 BC. But possibly it reflects much older traditions, even from the Predynastic period, towards 3100 BC.

Meskhetyu’s close union with royalty and the celestial world has another side. An inscription from the temple of Edfu, from the 3rd century BC, reads: “By observing Meskhet [yu], I have established the four corners of the temple of his majesty”; this means that the temple was oriented in the direction that Meskhetyu was visible on the horizon.

Orientation was carried out through the ceremony of “tightening the rope” , in which the king, in the company of the goddess of the reckoning of time and writing, Seshat, fixed the axis and the perimeter of a temple by means of certain observations, surely astronomical in nature.

In fact, the observation of the stars and other celestial bodies to orient sacred buildings has been recorded since the dawn of Egyptian civilization, just like the ceremony of tightening the rope itself, cited in the annals of a sovereign of the First Dynasty.

In particular, Meskhetyu could always be the Egyptians’ reference to establish meridian orientations, that is, based on the stars that are visible in a meridian (the imaginary line that runs from north to south and divides the celestial vault into two halves, eastern and western).

The pyramids and the firmament

Not all the pyramids of Egypt are correctly oriented; in fact, only a few of the more than sixty that we know of have a precise orientation.

The pyramids of the pharaohs of Dynasty IV at Dahshur and Giza are the best oriented, with errors that, in astronomical terms, are around a quarter of a degree, or 15 minutes of arc; in some, like those of Khufu and Khafre, the error is even less.

If we think that the sun or the full moon as we see them with the naked eye have a diameter of about 36 minutes of arc, we will realize that such results, with such small errors, would only be within the reach of a highly trained observer, with quite experienced and equipped with the most precise instruments of the time.

It is curious that the oldest pyramids are the best oriented. To explain this fact, various theories have been proposed, based on the use of astronomical observation to determine the north-south line.

In the 19th century, the astronomer Piazzi Smyth suggested that Thuban had been used to align the Great Pyramid, which at that time was the pole star (the one that is closest to the celestial pole with the naked eye).

The proposal was seconded by Heinrich Karl Brugsch, one of the most renowned Egyptologists of his time. Thuban reached its position closest to the pole around 2787 BC, when it was about two arc minutes from it.

However, in the time of Piazzi Smyth and Brugsch it was unknown that the Great Pyramid was built at least two centuries later than it was then supposed.

Orientation methods that rely on observing the sun or the shadows caused by this star have also been proposed.

In 1931, Ernst Zinner proposed to observe the minor shadow produced by a gnomon (a stick driven vertically into the ground), since, in our hemisphere, the shadow produced by the sun at noon is the shortest of the entire day and is projected northward.

However, the difficulty of outlining the shadows made it difficult to achieve the required precision. But in the late 20th century, American artist Martin Isler stated that shadows could be adequately shaped by certain techniques that may have been available in Pharaonic times.

Following this idea, archaeologist Glen Dash, a member of the Giza Plateau Mapping Project (whose objective is to comprehensively map the Giza plateau), has recently conducted experiments showing that the so-called “Indian circle method” could have provided the required precision, by observing the displacement of the solar shadow throughout a day; but there is no evidence that the Egyptians knew of this method.

In the 1980s, astronomer Steven C. Haack discovered that errors in the orientation of the pyramids of Dynasty IV and some before and after appeared to follow a temporal correlation.

The older pyramids were less oriented than the later ones, but the error decreased to a minimum in the reign of Khufu and increased again in later monuments.

According to Haack, there would be a cause that explains this surprising behavior: the precession, the gradual change that registers the axis of rotation of the Earth.

This important find happened without much glory because Haack postulated that the pyramids were oriented according to the orthography of certain stars (that is, the point at which they appear in the sky), a method that has been proven not to be accurate enough.

For this reason, the method that has obtained the most support is that proposed in 1947 by IES Edwards.

An artificial horizon must first be established (for example, a stone wall) to avoid the problems caused by atmospheric extinction (the loss of light from a star as it passes through the Earth’s atmosphere) and refraction near the horizon (the change of direction of light).

Next, a circumpolar star must be selected, observed in its nocturnal movement and marked on the artificial horizon the positions of its rise and set, which would precisely indicate the north-south meridian line.

The supposed accuracy of this procedure, which has not yet been tested experimentally, has won the support of the scientific community, although there is no evidence of its use.

Once again, that the architects of the pyramids worked with sophisticated master plans, in which practical issues and religious symbolism were interwoven; in this case, the intimate relationship between the circumpolar stars and the existence of the deceased pharaoh in the Hereafter.

And although, we cannot say that the problem of the orientation of the pyramids has been definitively solved.

How did the ancient Egyptians drag the stones for the pyramids?

How was the first pyramid in history built?