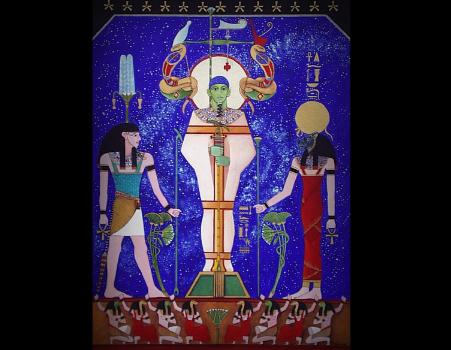 The god Ptah was one of the most important for the ancient Egyptians. Patron of the city of Memphis , capital of the Old Kingdom, he was considered the creator god, “the one who gave life”; the “master builder”, inventor of masonry and patron of architects and craftsmen.

His name could mean “The Creator” , sovereign of all the gods having created the world through the word. But he is known by other titles such as “Lord of Magic”, “Lord of Darkness” and “Lord of Truth”. He is also known as “the one with the beautiful face.” And “Lord of the Serpents and the Fishes.”

He is originally from Memphis and from the New Kingdom he formed a triad with his wife Sekhmet and their son Nefertum.

Ptah is represented as a small mummified man, a helmet on his head, wrapped in a shroud, from which his hands appear. Hold a scepter combining the djed pillar (symbolizing vegetation and fertility), the was-scepter (stability) and the ankh (life symbol).

He appears on a pedestal that symbolizes Maat, the cosmic order, to equal the other gods in stature. In addition, he is the only god who has a straight beard, since it is normal for the beard to be curved at its end.

As a funerary god, he is related to Ptah-Sokar-Osiris, mumiform in appearance with a human or falcon head and a white crown flanked by two tall feathers. He is also related to other deities such as Nun, Hapy, Shu, and Geb.

And mainly he is associated with Ra and Amun without actually merging with them as is the case with other gods.

He is related to Tatenen as a manifestation of Ptah at the time of creation. Ptah created local gods, built cities, and put each god in the place where it should be worshiped. And all this he did through his heart (seat of thought), his language (the creative verb) and the Maat (concept of order and justice).

One of his most important functions is that of patron of artisans, especially goldsmiths and sculptors, considered the inventor of manual techniques and practices. Thus Ptah was worshiped in the well-known artisan village of Deir el-Medina.

Great personages included in their name this god, as examples: the well-known Ptah-hotep, Egyptian sage of the Old Kingdom; or the Pharaoh Merneptah, belonging to the New Kingdom.

His main center of cult was in Memphis. At Karnak, Ptah had a temple within the precinct of Amun. He was also worshiped at Thebes, Abydos and in Nubia.

Djed Pillar, the mysterious symbol that symbolized the backbone of Osiris and provided stability to ancient Egypt

Tomb of Kha and Merit