Home / The Discovery of Mummified Crocodiles in an Egyptian Tomb

The Discovery of Mummified Crocodiles in an Egyptian Tomb 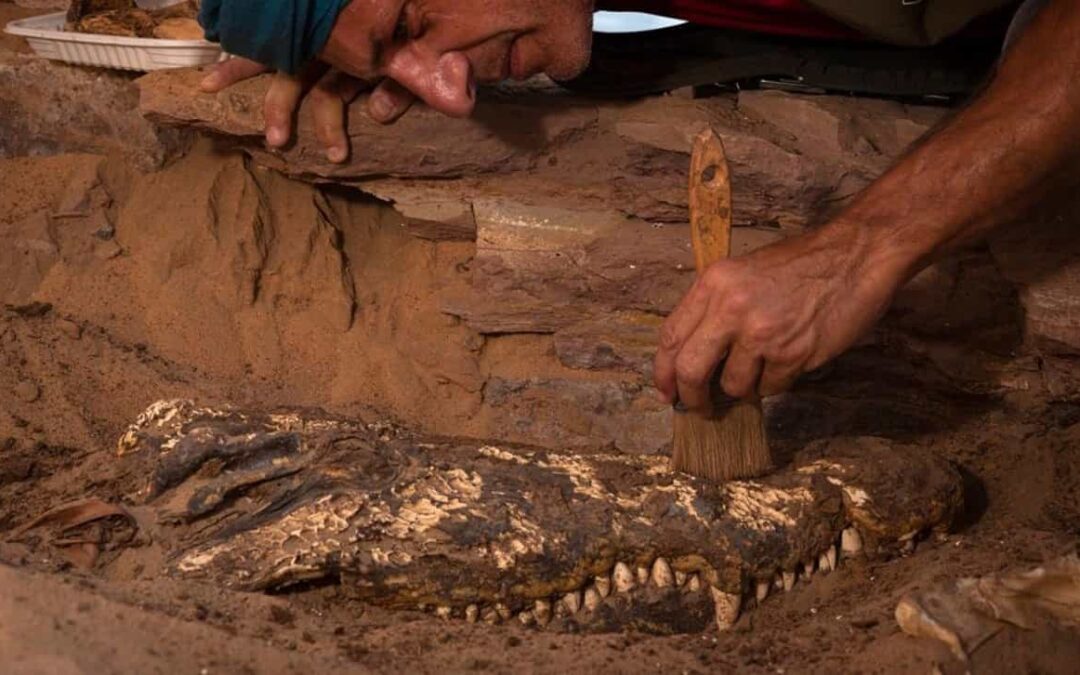 The tomb, called Qubbet el-Hawa, is located on the west bank of the Nile, opposite Aswan, at the first cataract of the river. During both the Old and Middle Kingdoms, Qubbet el-Hawa served as the final resting place for Elephantine’s governors, nobles, and priests.

The necropolis was in use from the 4th Dynasty to the Roman period, and archaeologists have discovered more than 100 tombs there. The last burial, intact, was discovered in 2019 by archaeologists from the University of Jaén, inside of which they found the remains of ten mummified crocodiles (five skeletons and five skulls).

Crocodiles were a part of the rituals related to Sobek, the god of fertility, vegetation and creative power, who was also a protective divinity. The ancient Egyptians associated Sobek, usually represented by a man with the head of a crocodile, with other gods such as Amun, Ra (as Sobek-Ra), Horus, Herishef, and even Seth, the god of chaos and destruction.

Cult of the god Sobek

“This is an extraordinary find, since it is one of the rare occasions in which specialists have been able to study crocodile mummies in situ and with modern methodologies,” said the members of the Qubbet el-Hawa Project.

The results of their research have been published in the journal Plos One. Additionally, the remains of these crocodiles have been analyzed by archaeozoologists from the Royal Belgian Institute of Natural Sciences in Brussels.

But why crocodiles in a grave? According to the archaeologists, “it is very possible that these animals could have served as intermediaries between humans and Sobek, who was the god of water and fertility, often represented with a crocodile head.”

In fact, the cult of Sobek was of great importance in the nearby town of Kom Ombo, just 50 kilometers from Aswan, where there is a temple dedicated to this god. “Kom Ombo was an important center of crocodile worship , although the same was not known to happen in Aswan,” the researchers note.

For her part, archaeozoologist Bea De Cupere from the Royal Belgian Institute of Natural Sciences in Brussels said, “More than twenty burial places with crocodile mummies are known in Egypt, but finding ten well-preserved mummies of these reptiles together in one tomb intact is extraordinary.”

“Actually, we don’t know exactly where most of the mummies collected by museums at the end of the 19th and beginning of the 20th century come from, often they are calves,” adds the researcher.

Regarding the specimens located in the tomb of Qubbet el-Hawa, the smallest reptile measures 1.8 meters long while the largest reaches 3.5 meters.

Thanks to new work methodologies, Alejandro Jiménez, the director of the Qubbet el-Hawa Project, explained that it has been possible to differentiate “up to two species of crocodile that lived in the Nile Valley (currently there is only one species), the Nile crocodile and West African crocodile.”

Along with the remains of the crocodiles, archaeologists found traces of linen, palm leaves, and ropes, which suggest that the animals were wrapped in the past, although their bandages have disintegrated over time.

Thankfully, due to the fact that they were not covered with large amounts of resin or bitumen, archaeologists have been able to measure and study them further. They have discovered that “they are older than most surviving crocodile mummies.”

Some of the specimens were almost complete, but others were missing parts of their bodies. This suggests that the crocodiles “were first buried elsewhere, possibly in sand pits where they dried naturally, and then their remains were exhumed, wrapped and transferred to the tomb at Qubbet el-Hawa.”

The researchers suggest that it is possible that some fragments may have been lost during the process of packing and transporting them. One of the crocodiles still contained gastroliths inside, stones that these animals have in their intestines that help them stay balanced in the water. This suggests that the reptile was not cut open for its intestines during the mummification process.

Museums in England recommend against using the term "mummy"