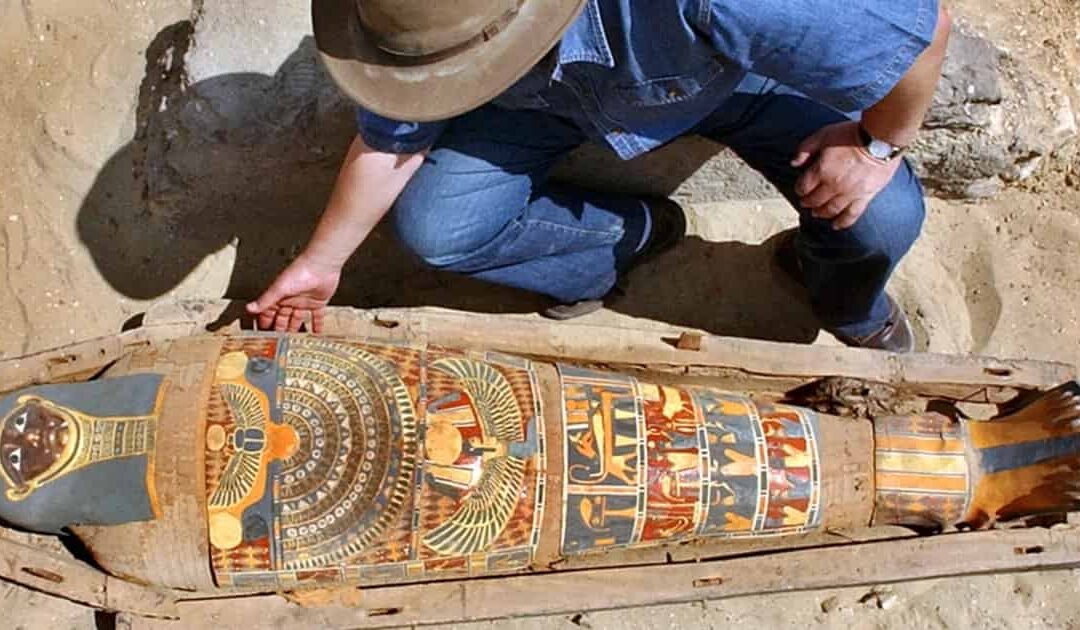 The mummies can be beautiful. This is the case of the one found in Saqqara, 60 kilometers southwest of Cairo, and which has been enthusiastically described by Egyptian archaeologists who have found it as the most beautiful mummy ever discovered in Egypt.

The mummy is covered by a golden mask that reproduces a face, and the plaster-hardened and painted linen casing is dazzlingly coloured.

Turquoise blue, yellow and red are combined in a truly sensational decoration. Among the painted images appear the gods Khepri -in the form of a beetle with wings-, Horus, Maat, Anubis and Osiris.

Part of the decoration on mummy’s chest reproduces a spectacular beaded necklace.

It is paradoxical, but the body that lies under this authentic work of art is unknown. The mummy is only known to date from the late 30th Dynasty (380 to 343 BC).

“Indeed, it is the most beautiful mummy found so far in Egypt, due to the turquoise blue, golden yellow and red colors with which its linen wrapper is painted, hardened with plaster and other materials,” said Egyptologist Sabri Abdelaziz.

Saqqara is the site of the main necropolis of the city of Memphis, on the west bank of the Nile, located about 30 km south of Cairo and 22 km southeast of the pyramids of Giza. Functional from the First Dynasty (ca. 3050 BC) to the Christian period (ca. 540).

In 1979, the whole of Memphis with its necropolis and pyramid fields (Giza , Abusir, Saqqara and Dahshur) was declared a World Heritage Site by UNESCO, under the name of Memphis and its necropolis – Areas of the pyramids from Giza to Dahshur.