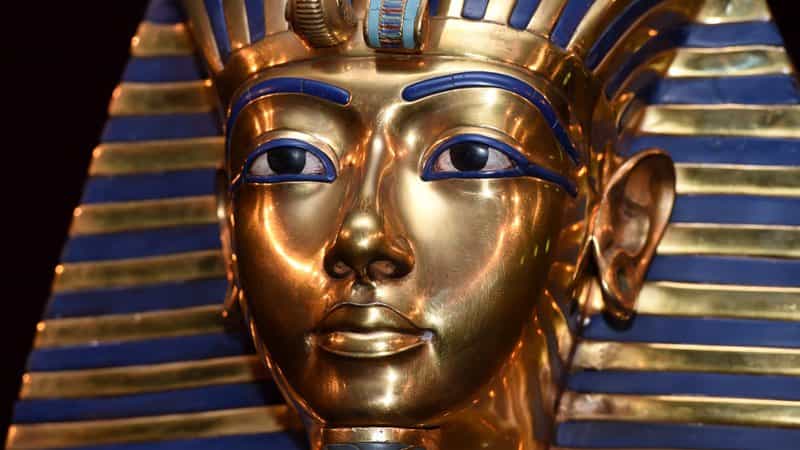 The objects in the Pharaoh’s sarcophagus, found by archaeologist Howard Carter, tell us more than we can imagine.

In November 1922, when Howard Carter found Tutankhamun’s tomb intact, his fame spread around the world. However, there is information about the Pharaoh that few people know. Check it out below!

8- The Pharaoh was buried in a second-hand coffin

During Tutankhamun’s burial, he was nestled in three golden coffins. Unfortunately, one of the coffins turned out to be too big.

Egyptologists believe that this coffin, with a slightly different face from the others, was made for Tutankhamun’s possible predecessor, the mysterious Neferneferuaten, whose information is scarce.

7- His real name was not Tutankhamun

The Pharaoh was originally called Tutankhaten, which means “living image of Aten”. After remaining on the throne for a few years, the young King changed his religion, abandoning the god Aten worshiped by his parents. He began worshiping the god Amun and gave him the name we know today, the “living image of Amun”.

The tombs in the Valley of the Kings were built well after the wave of gigantic pyramids propagated by the early pharaohs. With discreet doors, they were produced at the time of the New Kingdom (1550-1069 BC) and were spacious and well decorated inside.

However, Tutankhamun’s tomb was probably not the one where he would want to be. It was in the Western Valley where his grandfather, Amenhotep III, was buried.

He likely would have died too young for his tomb to be finished. Another hypothesis is that his tomb is much larger than we imagine and still has undiscovered compartments.

5- One of his favorite possessions was an iron dagger

During Tutankhamun’s reign, iron was a very rare and precious metal. Obtained from meteorites, it was known as “iron of the sky” and was discovered in the shape of a small dagger in his sarcophagus.

Other iron objects were also found in the tomb: sixteen miniature blades, a headrest, and an amulet, likely made by local craftsmen, which were not as well crafted as the dagger.

Another curious object is a fan made of feathers. Although the forty-two feathers that the fan supported gradually deteriorated, hieroglyphics on the shaft tell its story: the feathers were taken from ostriches captured by the King himself during desert hunts.

Two scenes are also engraved on the object: in one, Tutankhamun sets off in his chariot to hunt ostrich. In another, the King triumphantly returns with his prey.

3- The Pharaoh’s heart is missing

In the Egyptian mummification process, internal organs needed to be removed. The brain was thrown away for having an unknown function – but the heart, considered the organ of reasoning, should be carefully preserved.

But, it turns out that our Pharaoh’s heart has not been found. Instead, there was a scarab containing a funerary spell.

This means that he probably died far from home, and by the time his body reached the undertakers, the organ was too deteriorated to preserve.

2- Tutankhamun was buried in the world’s most expensive coffin

Two of the three coffins he was buried in were made of wood and covered with gold sheets. However, to Howard Carter’s surprise, the innermost coffin was made of thick sheets of beaten gold.

Measuring 1.88 m in length and weighing 110 kg, the object would be worth more than six million United States Dollars if it were sold today.

Among the various objects in Tutankhamun’s tomb was a small collection of musical instruments, such as ivory clappers, rattles, and two trumpets. While trumpets would be better classified as military equipment, rattles and ivory objects had a ritual purpose.

But that didn’t stop the two trumpets from being played on a live BBC radio broadcast at the Cairo Museum in 1939, reaching around one hundred and fifty million listeners.

People influenced by the myth of Tutankhamun’s Curse claimed that trumpets had the power to call for war. Interestingly, after the 1939 broadcast, Great Britain entered World War II.