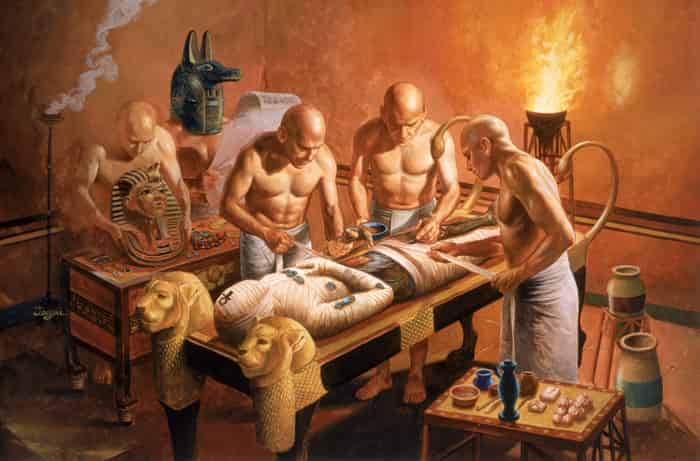 The culture of Ancient Egypt closely coexisted with the idea of ​​life and death. The same floods of the Nile that could sometimes be deadly due to the violence with which its waters flooded fields and roads also brought a renewed life.

Pliny the Elder, in his travels through the delta of the great river, described Egypt as “the black land”, referring to the silt that covered its fertile plains.

The Egyptian mummification ritual was directly associated with the concept of eternal life. In order to preserve the good appearance of the body, the mortal remains were anointed and covered with bandages and oils before meeting Osiris, the god in charge of appraising the life of the deceased between eternal life or the cruel punishment of being thrown to the beast. Ammit, eater of the dead.

During the preparation ritual carried out by the priests, the bodies were seasoned in perfumes, more specifically in seven fragrances considered divine.

The good smell was essential during the transition to death, since these perfumes were to the liking of the gods, from whose bodies it was believed that delicious essences emanated.

Covered in oils, the mummy was transformed into an exquisite corpse, a vehicle for eternal life that showed no signs of decomposition.

The smell of frankincense oil, pine and fir seeds mixed with the fragrances of cedar resin or acacia flowers. An olfactory cocktail that was intended to serve as a presentation to the Egyptian pantheon.

The discovery of Tutankhamun ‘s tomb in 1922 was marked by a halo of legend that still survives to this day. However, there are still details that fascinate us like the first day. On the death mask of the young pharaoh rested a crown of flowers, withered, but still retaining their color.

It was probably the remains of the last goodbye that his queen, Ankhesenamun, was able to give him before he set out on his eternal journey.

The discovery deeply marked Carter, who was in charge of removing the petals that after thousands of years remained almost intact due to the lack of agents in the air of the secret tomb.

In those years, the Valley of the Kings, where the tomb of Tutankhamun was found, was believed to have been fully explored or, if not, plundered by looters.

A detailed study of the young pharaoh’s tomb showed that it had been looted twice prior to Carter’s arrival.

Both thefts focused on the extraction of fragrances and perfumed fats from the pharaoh’s amphorae, secret and sacred preparations that had been jealously guarded by the priests and that constituted real booty for merchants from half the world.

The ancient Egyptians maintained very healthy habits of hygiene that kept at bay great epidemics that decimated other parts of the globe.

The custom of cleaning hands and feet before entering the home or shaving their heads to prevent the proliferation of parasites are just some of the customs that marked the daily life of the inhabitants of the kingdom of the Nile.